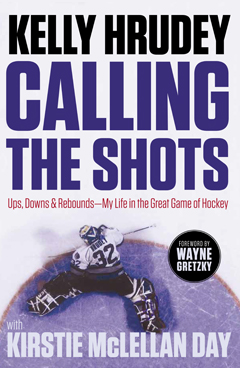 Few people have had a better front row seat to hockey history than Kelly Hrudey, whose former teammates include Mike Bossy, Denis Potvin, Jari Kurri, Paul Coffey and Wayne Gretzky, among many others of the game’s greats.

In 1987, he stood tall in net during the Easter Epic, the longest playoff game in Islanders history. Kelly made seventy-three saves (to this day an NHL record for most saves made in a playoff game) against the Capitals before Pat LaFontaine scored the winner in the fourth overtime period of Game Seven at two o’clock in the morning. Later that year, Kelly was in the Canada Cup lineup of one of the most talented teams ever assembled on ice. In 1989, he joined Wayne Gretzky and Marty McSorley on a team that took Los Angeles by storm: the Kings went all the way to the Stanley Cup final against the Canadiens in 1993.

Hrudey is now a well-respected hockey analyst and broadcaster and has watched with a keen eye as the game continues to evolve. Through it all, he has seen greatness and missed opportunities, inspiring moments and outright craziness. Working with bestselling author Kirstie McLellan Day, Kelly delivers a lively and thoughtful memoir, rich in behind-the-scenes anecdotes, humour and insight.

KELLY HRUDEY was born and raised in Edmonton, Alberta. The former Medicine Hat Tiger and Indianapolis Checker played for fifteen seasons in the NHL with the New York Islanders, Los Angeles Kings and San Jose Sharks. He is currently an analyst on Hockey Night in Canada and a colour commentator for the Calgary Flames. He lives in Calgary with his wife, Donna, and daughters, Jessica, Megan and Kaitlin.

KIRSTIE MCLELLAN DAY ranks among the top hockey book writers in the world thanks to the three national bestsellers: Theo Fleury’s #1 bestselling memoir Playing with Fire, Bob Probert’s Tough Guy and Ron MacLean’s Cornered. She's currently working with Marty McSorley on his upcoming Hellbent. Her other books include Above and Beyond, a comprehensive family and business history of cable magnate J.R. Shaw; Under the Mat, a memoir with Diana Hart of the Hart wrestling family; and No Remorse, a true-crime novel. Kirstie is a mother of five and lives with her husband, television producer Larry Day, in Calgary. Together they own one of Canada’s most successful television companies, Pyramid Productions. Follow her on Twitter @kmclellanday.